Nelson Stevens found himself in the position of proving to the professors and the people in the Art Department that there was such a thing as 'Black art' he began to research the Wall of Respect in Chicago and ran into great resistance his professors believed that there was no prejudice in art; prejudice existed but certainly not within the world of art. Nelson developed the concept that 'art was for the sake of people'. 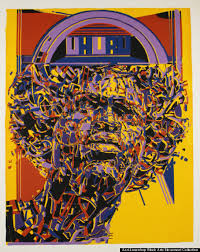 The colors in Nelson Stevens's 1971 screen print entitled "Uhuru" challenged my preconceptions of portraiture. Stevens, who joined AfriCOBRA in 1969, is credited with contributing the principle of "shine" to the collective's school of thought. "Shine" refers to the Afros and newly-shined shoes worn by Black folk. "Uhuru" shined with kinetic shape and color, forming the heroic, visionary gaze of a proud, Afro-adorned male, his eyes set toward the future of Africans throughout the Diaspora. Black Arts Movement theorist Larry Neal's reference to these artists as "visual griots" and "image makers" is exemplified in "Uhuru," which shouts with 21st century hope and solutions.